I was 17 in this picture taken in Montreal with my two nieces.

This picture was taken in 1978 for the Loyola News in Montreal. I was the Chair of a Committee investigating the Libraries of Concordia University. 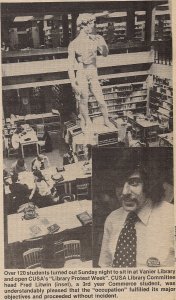 As part of the Library Protest Week at Concordia University in 1978, we organized an occupation of the Library on a Sunday night to show that it could easily be open weekend evenings for study.

You can see me on the right holding one end of the banner. This was the start of our march to the Concordia University Administration building protesting the Libraries.

An ad in the Canadian Jewish News in 1982 calling for an end to the war in Lebanon. You can see my signature in the second column. 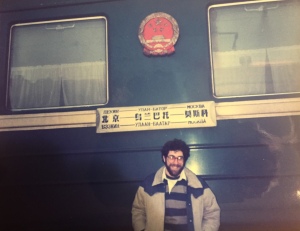 This was taken in early December 1983. I am standing outside the Trans-Siberian Express in Moscow. We’re just about to leave for Beijing via Ulan Bator. 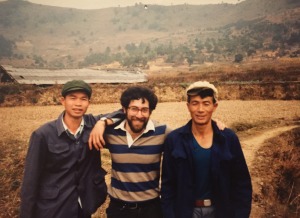 In 1983, I took the Trans-Siberian Express from Moscow to Beijing. I then spent two months backpacking throughout China. Here I am in Southern China.

This picture was taken in the late 1980s when I was Vice-President of Sales for LAN Systems in New York City.

I was in Hong Kong for the handover in 1997. At about 2:00 am that night, there was a protest at the Legislative Assembly (which China was abolishing) and the leader of the democratic party, Martin Lee, gave out these to people attending.

Noam Chomsky’s “9-11” was a short book published right after 9/11. This book was on the counter of Book City on the Danforth in Toronto and you can read my reaction to seeing it in chapter one of Conservative Confidential. 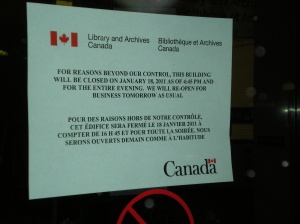 The notice on the front door of the Library and Archives Canada building the night that threats were received prior to the showing of Iranium. See Chapter four in Conservative Confidential.

Here I am on Power Play on CTV right after the Iranium kerfuffle. 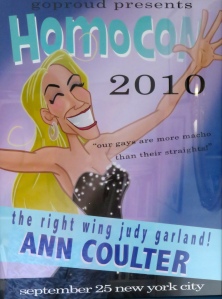 The January 2006 cover of Capital Xtra with their infamous story on Stephen Harper’s Holy War on Homos. See Chapter five in Conservative Confidential for a discussion of the article.

The invitation to the Fabulous Blue Tent party in 2011. See Chapter six in Conservative Confidential.

Here I am with John Baird at the first Fabulous Blue Tent party.

The big National Post article on gay conservatives in which I was featured. See Chapter six.

The title caption for our documentary, This Hour Could Have 10,000 Minutes, on the biases of the CBC. See Chapter 7 in Conservative Confidential.

The sponsors for the People’s Social Forum in 2014 in Ottawa. The forum was marred by an outmoded, anti-colonialist, “anti-imperialist” view of the world. See the Postscript in Conservative Confidential.

A terrific picture of me with Raheel Raza on the left and Nazanin Afshin-Jam on the right. This was taken at the Free Thinking Film Society’s showing of “Honor Diaries” which examined women in the Muslim world.